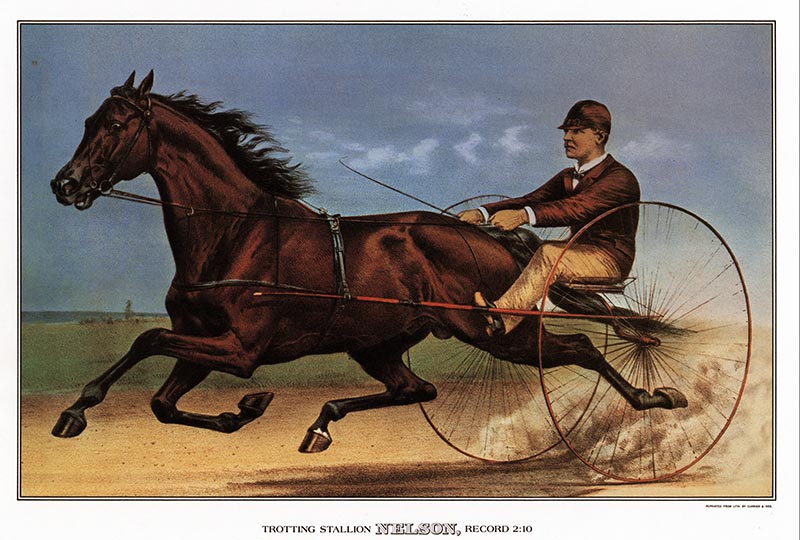 C.H. Nelson’s Story — From Fame & Glory to Shame then Redemption

S. Dexter’s The Maine Spirit of the Turf’s May Issue features the story of C.H. Nelson and his famous trotting stallion, Nelson 4209. Nelson’s story is compelling. Nelson grew up in the towns of Palermo and Branch Mills. His father owned a small general story and worked as a teacher. From an early age Nelson discovered his love for horses. When Nelson returned from the United States Civil war, he married Emma Aubine Jones. They purchase a home in China, Maine (stilling existing). It was at this location that Nelson started his harness racing career. In the year that Nelson 4209 was foaled, the Nelsons purchased a farm on the Oakland Road in Waterville, Maine. The year was 1882.

Clark Thompson, harness racing historian and author of the book, Maine’s Trotting Horse Heritage Trail, as he conducted his research discovered for the first time the existence of Nelson 4209. The Redington Museum had a Nelson display, but the story was not commonly known throughout the State of Maine. Lost to the consciousness of Maine people, Thompson’s work highlighted an aspect of Maine that had truly been forgotten. There are lessons to be learned from this more than 100 year old story — a story with lessons for modern day horsemen and fans of harness racing.

This three-part story can be downloaded clicking the links below.