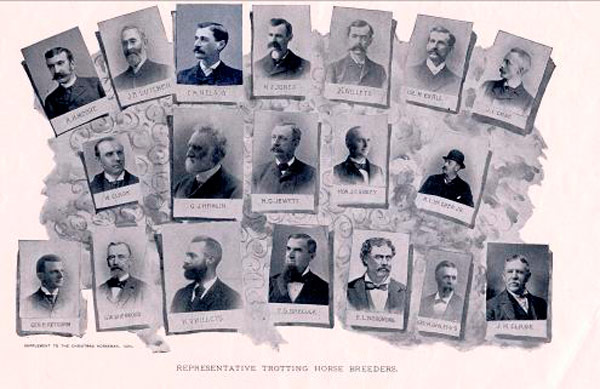 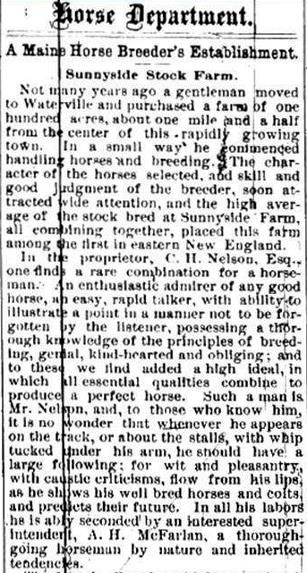 At the age of nineteen, Hod enlisted in the Maine 12th
Infantry, Company F and became disabled. However, In 1865 after he recovered, he re-enlisted in 19th Infantry, Company G and on March 3, 1866 at Savannah, Georgia, he was honorably discharged, but suffered from lifelong health issues. Some years after the Civil War, Nelson
became the commander of the Waterville Grand Army of the Republic.  On November 7, 1867, he married Emma Aubine Jones.

In 1882 the same year that Nelson 4209 was foaled, Hod Nelson purchased 69 acres of land on the Oakland Road in Waterville, Maine. This land became his main base, the home to Nelson 4209, and eventually became known as Sunnyside Farm.

Between 1882 and 1888 Hod Nelson’s reputation as a horseman and breeder solidified his status as the leading horseman in the State of Maine. Nelson 4209 was recognized as Maine’s premiere three-year old stallion trotter. During this time period Nelson’s land holdings increased to 540 acres. This included a 300 acre farm in Fairfield Centre, the former fairgrounds and trotting park of the North Kennebec Agricultural and Horticultural Society, and other land in Waterville and Winslow. In the spring of 1888 John Wallace journeyed by boat and train to Waterville and interviewed Hod and his wife Emma at the Elmwood Hotel. For ten years, Hod and Emma made their home at the Elmwood Hotel. In his article, Wallace describes Hod Nelson’s development as a horseman and breeder.

Nelson 4209 by Young Rolfe, Dam Gretchen 1888 Painting by W. A. Treat — Painting said to be commissioned by Hod Nelson This painting includes the only known images of the Sunnyside Farm buildings.

Newspaper articles from the Lewiston Sun Journal, the Kennebec Journal, and the Waterville Sen-tinel provide accounts of Hod Nelson’s life on the farm, on the track and traveling throughout the United States. Nelson purchased a train car for his horse as he traveled by rail. When traveling Nelson would place mattresses around his horse and stay with him in the rail car. From 1882 to 1891, Nelson experienced the fame and glory of the horseman with a champion trotter. As illustrat-ed in many articles Nelson had many fine qualities, yet his temperament of being quick to anger resulted in polarizing his relationships into those who were his loyal friends and those who were his enemies. As Nelson’s reputation grew, Sunnyside Farm became the destination for hundreds of people who wanted to see Nelson’s operation, his stallions, and to listen to Nelson talk about his horses. Nelson was recognized as Maine’s premiere horseman. In a race at the old Lewiston Race-way, Nelson 4209 became the fastest three-year old in the United States. In 1890, Nelson 4209 set the stallion world’s record on a half-mile track at Maplewood Park in Bangor, Maine.