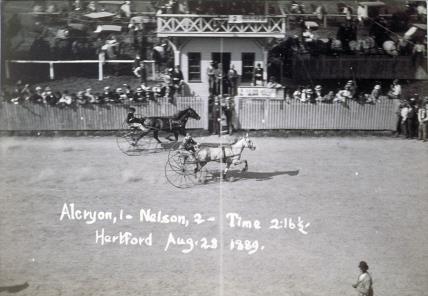 During this period, Hod Nelson began his travels that led to the two year suspension of Nelson and Nelson 4209 from tracks sanctioned by the National Trotting Association. Newspaper reports tell of the possible sale of Nelson 4209 pursuant to Nelson 4209 breaking the world’s record in his next race. This race may have been the race against Alcryon at Charter Oaks Park in Hartford, Connecticut in 1889. According to newspaper accounts Nelson purchased a starting position in the race and then chose not to pay the fee. The race did take place and Nelson 4209 was driven by Ira F. Woodbury. He won the first heat by ten lengths. This heat was the only heat won by Nelson. Alcryon won the remaining heats. Hod Nelson attributed the loss to his horse not being in the best of shape. However, a later article in a Hartford newspaper reported excessive starts and further stated that the starter was known to be
biased for his favorite horses. A letter in one of Maine’s newspapers from Samuel Currier of Hallowell, Maine, addressed the possibility that Nelson’s driver sold the race. The result of the Charter Oak Park race may have set the stage for the fix of the Balch Race in Boston, Massachusetts on September 23, 1889.