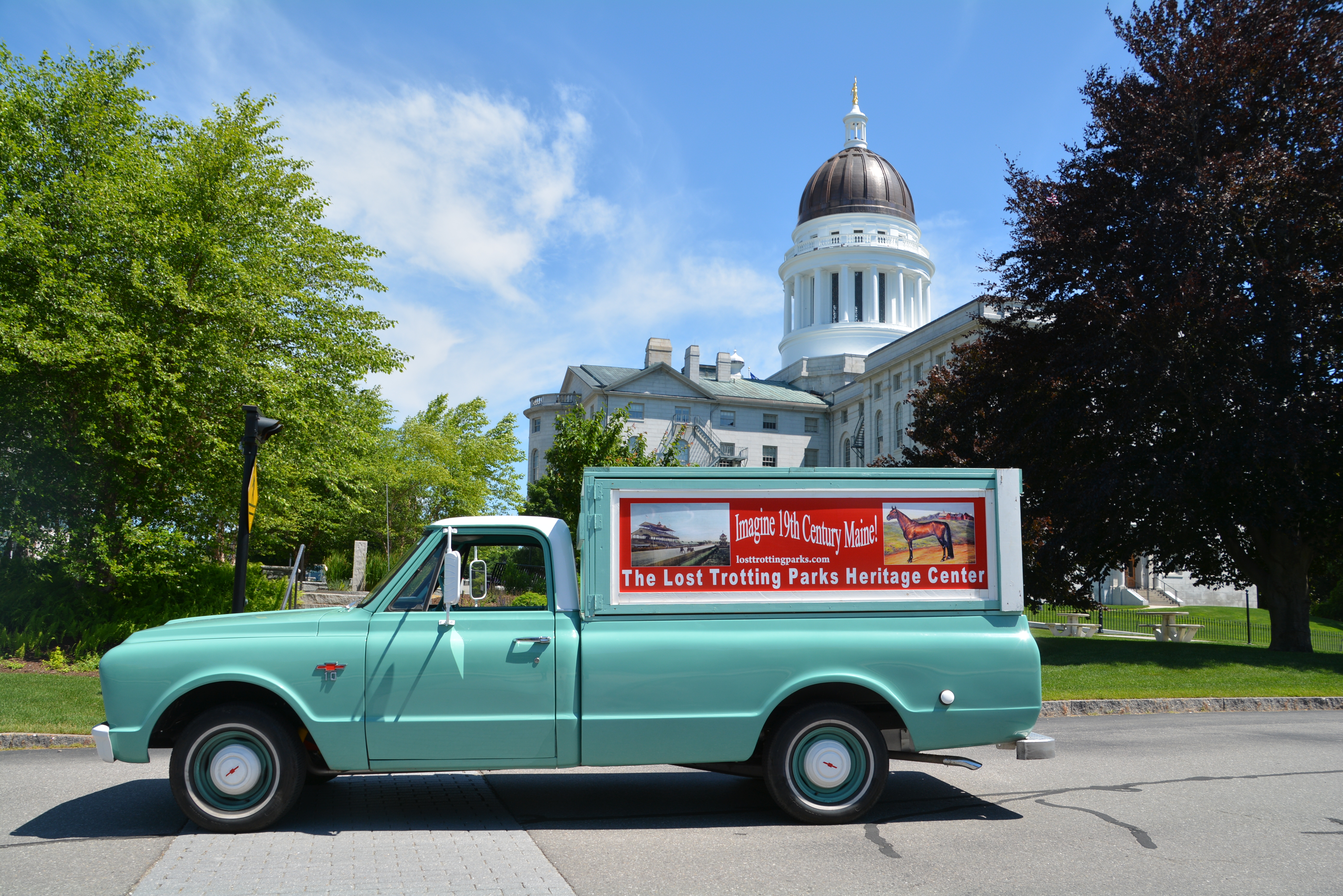 This year will be a critical year for the Lost Trotting Parks Heritage Center. Each year fund raising becomes more difficult and 2017 may be the last year individuals can take tax deductions for their charitable contributions.

Contributions have allowed Lost Trotting Parks to develop its website, losttrottingparks.com, print storyboards and banners support onsite presentations, displays, and content for Maine’s Starting Gate Museum — Maine ‘s Agricultural Heritage on top of a Chevy C-10 Pickup. Funds have also allowed Lost Trotting Parks to purchase the 1874 painting of King William by George H. Bailey, the painting of Pershing Hanover with Jimmy Jordan up that was commission by Gordon and Frances Drew and approximately 750 photo negatives of harness racing in Maine and Massachusetts taken by Guy Kendall, Maine’s premiere track photographer from 1920 to 1950.

Lost Trotting Parks has also received contributions that add content for research and displays.  This year Lost Trotting Parks is requesting donations from $35 to $50. You can donate what you can afford. However, donations that are in the $35 to $50 range and above will receive a complimentary copy of The Maine Horsemen’s Journal and Calendar. The Journal is a 110 page document that allows you to schedule, document and comment on the events of the 2018 Harness Racing Season.

The Lost Trotting Parks Heritage Center is a charitable organization recognized by the Internal Revenue Service and registered with the State of Maine. The Center was established as a nonprofit in 2012. Since that time the Center has been fortunate to have dedicated Directors who have given their time and donated funds to the effort. My thanks and appreciation to the following individuals who have served as board members: Clark P. Thompson, Rayle Reed Ainsworth, Alice Atkins, Sam Webber, and Dennis St. Pierre.

Another wonderful contribution to Lost Trotting Parks and in partnership with was Laurie MacKenzie and the All Heart Campaign. This 2015 brought greater visibility to harness racing throughout Maine. One example: Laurie organized the first parade on the track at Bangor Raceway in years. It was also the first in many years that the Bangor Community Band played at the track. Profiles of Maine Harness Horsemen were created and published on the Internet. The most surprising project was producing a deck of playing cards that had a photo of a Standardbred on the track and beneath the name of the horse, owner, driver and best time. The All Heart Campaign presented harness racing as an authentic way of life.

Our initial fund raising goal is $5,000.00. This initial funding will cover the costs of the development and printing of banners displays ($200 each} for the Maine Starting Gate Museum, web site related costs, the development and printing of storyboards for displays and presentations throughout Maine. In addition, Lost Trotting Parks plans to publish limited issues of S. Dexter’s The Maine Spirit of the Turf to promote harness racing throughout 2018.

If a business, group, or individual would like to donate the full $200 towards a banner, their banner will include their name (s) and or company logo/website. 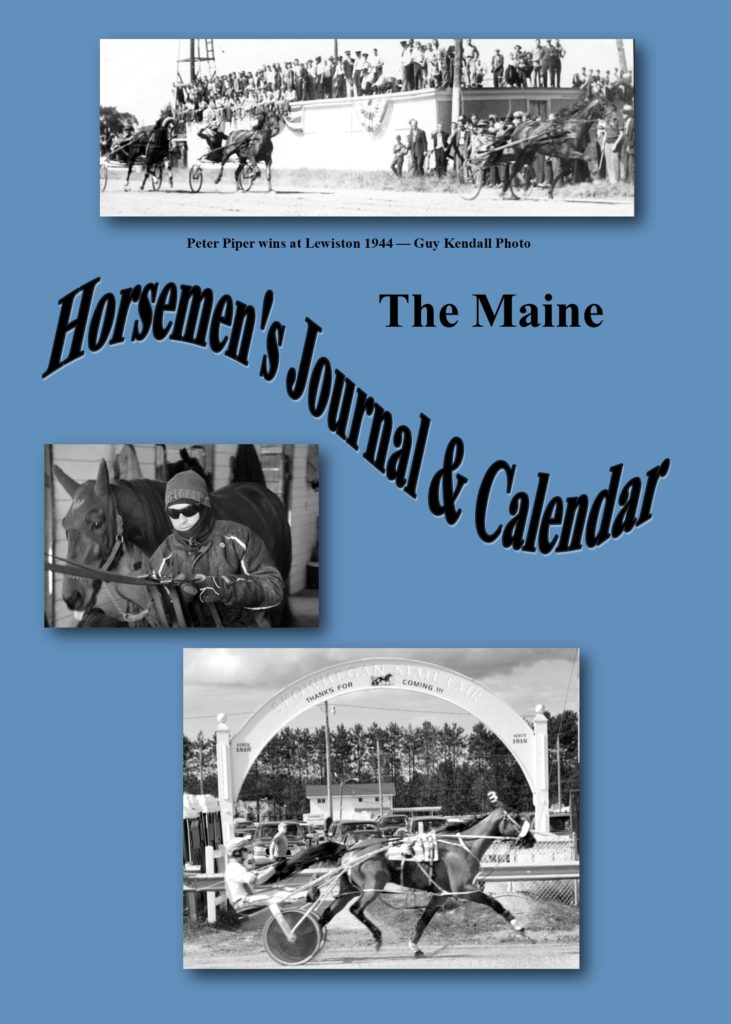 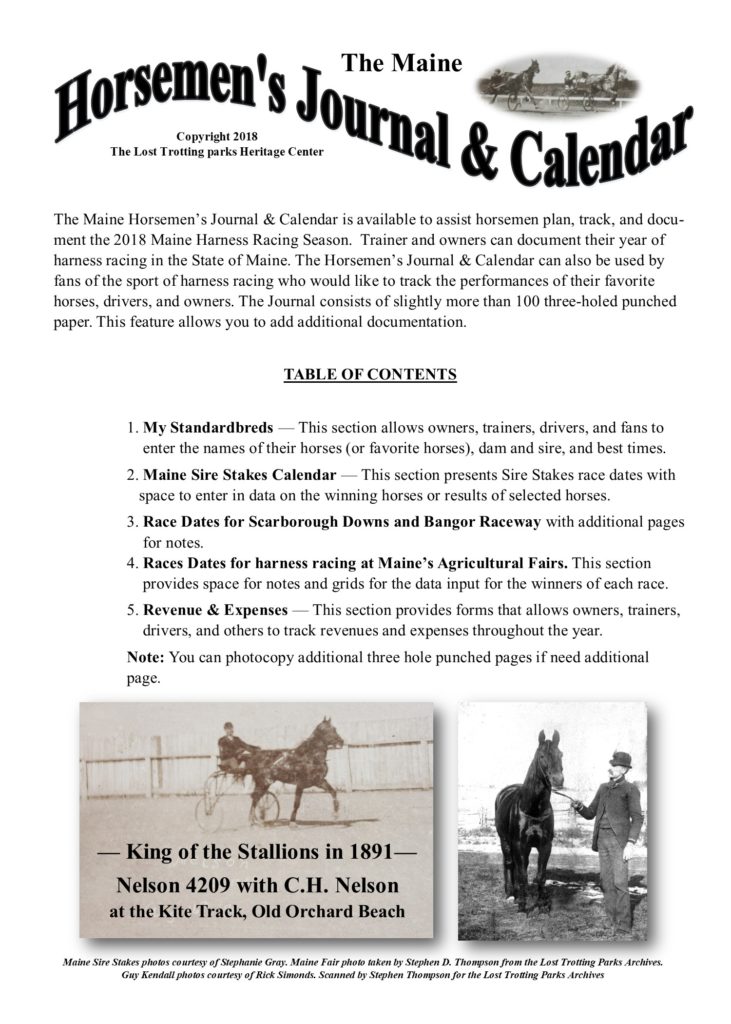 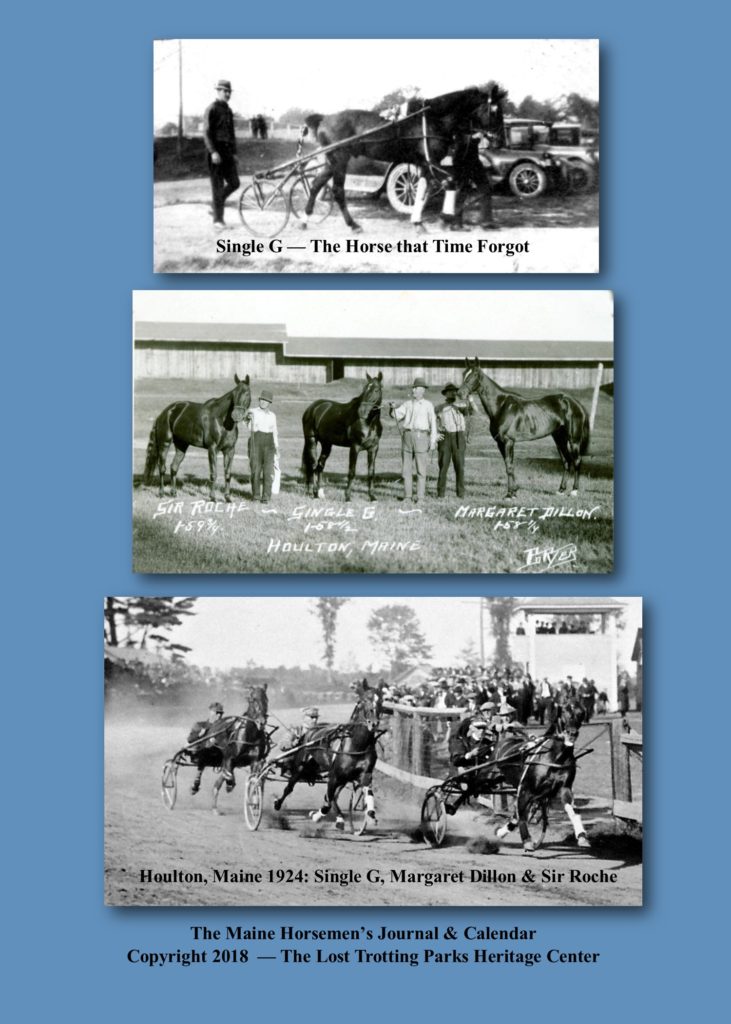 Back page of the Maine Horsemen’s Journal & Calendar