The Lincoln Trotting Park was situated on the Northerly (right) side of Park Street. It was unique, in that it had a solid clay base by nature, thus making it the fastest track in Mainc — somc say in Ncw England.

Several prominent men owned trotting horses in the 1930’s and interest ran high in that decade. There were two major racing events each year, one on the 4th of July and the other on Labor Day. Thc best trottcrs in New England raced for considerablc purses. Tickets were sold and betting was heavy and heated. At one race the gate prize was an automobile. Beneath the grand stand displays were shown. 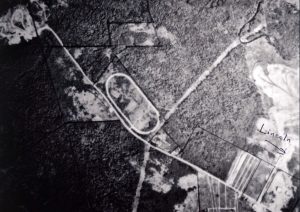 The park was completely fenced in on the front and part way on both sides. The parking for the wagons, and later automobiles, was on the infield of the racetrack and across the road from the track. The racetrack was a 1/2 mile oval track and the grand stand held approximately 1,000 people. During the events held at the park the noise could be heard as far away as the intersection of Park Street and West Broadway. On a typical 4th of July in Lincoln. at the height of the park’s popularity, there were swimming and canoe races at the dam on Mattanaweook Lake. There was also a greased pole contest and a greased pig chase. After a large parade the crowds then moved to the Trotting Park for the rest of the events.

Randolph Weatherbee held boxing matches at the park each year. Dr. George Way of Lincoln was the ring doctor. As an added attraction between boxing matches, two local men were blindfolded. balloons were tied to their bodies and they fought in the ring for the crowd’s amusement. Also each year a carnival was held at the park. The carnival provided horse races. horseshoe contests and other games for the crowds to enjoy. There were Merry-go-rounds and swings, but never a Ferris wheel. The carnivals featured girlie shows where the local boys were usually caught trying to sneak in under the flap of the tent.

In the 1940’s the first causality in the demise of the park was the restaurant which was on the right as you entered the park grounds. George Edwards moved this building to Mattanawcook Street in Lincoln. and madc it into a home. During this period Mr. Edwards tore down the grand stand, horse barns, and the judge’s stand, and used the lumber to build more houses on Mattanawcook Street. The vacant property was then sold to family members of Mr. Edwards.

In the early 1960’s the Double “L” Riding Club held their show’s in the summer months at the park grounds. Milton and Mona Taylor were the motivators in organizing these events. At this time they owned beautiful Arabian horses. These shows were the last public events held on the park grounds.

In the late 1970’s the land was sold to the Woodex Company. This company built a small factory manufacturing wood pellets for stoves and furnaces. The plant went into operation on October 8, 1980, producing these pellets as an alternative energy source to fuel oil to heat homes and businesses. After a few years of operation, oil prices stabilized, which eventually forced the company to close. The property and building remained vacant until the late 1980’s when Lincoln Pulp & Paper purchased the property for a storage facility and wood yard.