By delaying his admission of guilt, Nelson set off on a course that allowed his stallion to make history.

It was the series of races in September and October of 1890 that Nelson and his horse set the world’s stallion record on a regulation oval mile track with a high wheel sulky. Nelson 4209, called the Northern King, was now the King of Stallions.

Given his NTA suspension, Nelson sought and gained membership in the American Trotting Association. Nelson’s ATA membership was a subject of great debate among NTA directors. Some speculated that a powerful NTA member influenced the decisions made by the NTA regarding the Nelson-Alcryon Case.

In November of 1891, the Waterville Sentinel reported that Nelson had completed all land negotiations and that work had begun on a mile track in Waterville, Maine. By the end of November, the Sentinel
reported that Nelson had abandoned his Waterville mile track. In the midst of construction, Nelson learned that the City of Waterville had planned to build a road through the center of his proposed track. At this point, Nelson became a member of the Maine Mile Track Association and invested his money in the building of Rigby Park located in South Portland, Maine.

In 1892, Rigby Park became the site of Nelson 4209’s best time of 2.09. In the summer of 1893, Nelson traveled with stallion to the Moosepath Trotting Park in St. John, New Brunswick. Nelson 4209 broke the track record and recorded his best time of 2.07 3/4. This record time remained Moosepath’s track record for more than ten years. This time was never published in the United States.

In the third heat, Directum was so far ahead that Nelson slowed his horse down and slowly trotted to the finish line. From this point forward Nelson may have driven Nelson 4209 as part of exhibitions.

At some point between 1889 and 1893, Nelson partnered with Samuel Currier of Hallowell with the opening of the Pine Grove Stock Farm. This farm was once owned by Benjamin Vaughan and Governor Joseph Bodwell. Newspaper ads and catalogs indicated that this farm was operated by Nelson and Currier between 1893 and 1897. Around 1900 the farm was sold back to the Vaughan family. William Vaughan operated the farm for one year as the Pine Grove Stock Farm. 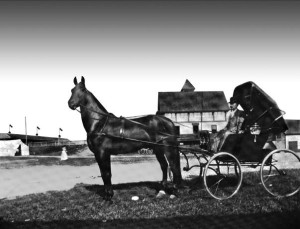 After 1894 Nelson continued breeding and selling horses. His famous stallion was still in service. In the early 1900s ads can be found in various newspapers offering stallions for service that were Nelson’s get. Other newspapers present newspaper articles speaking of Nelson’s continued reputation as a horseman and as an authority on identifying excellent horses. Never again did Nelson breed a horse with the qualities and abilities of Nelson 4209. There must have been just the right magic in the breeding of Young Rolfe and Gretchen. Sadly, Nelson sold Young Rolfe. He attempted to buy Young Rolfe back, however, the horse died being pushed too hard by his driver on a track out of state.