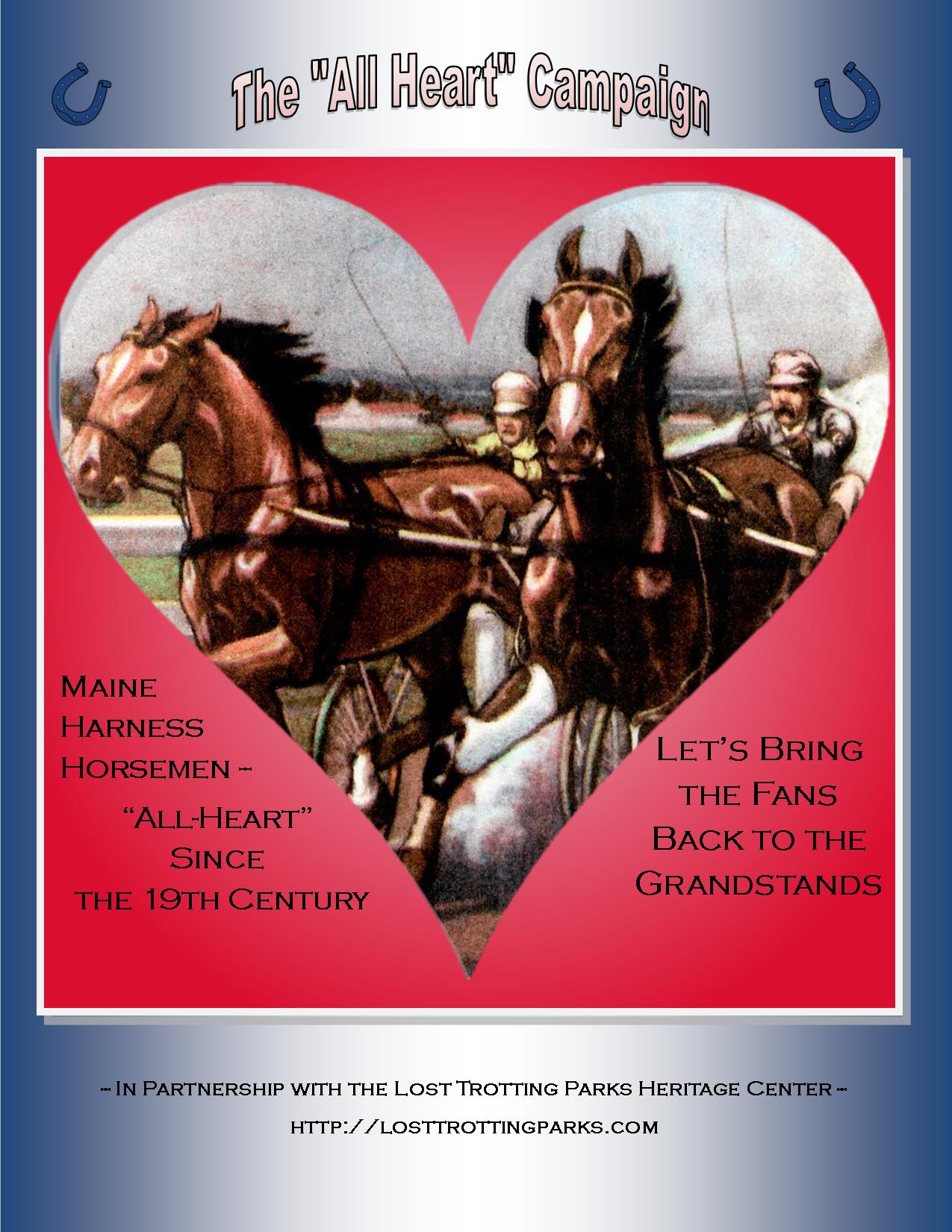 Plymouth, Maine – On March 20, 2015 at 10:30 in the morning, the “All Heart” Campaign, a grass roots initiative by Maine’s Harness Horsemen, will visit the Barbara Bush Children’s Hospital at the Maine Medical Center in Portland. Organized by “All Heart” founder, Laurie Ballard MacKenzie, Maine reinsmen, Kevin Switzer, Jr., Drew Campbell, Dan Deslandes, Eric Davis and Matt Athearn will visit children at the hospital.

2014 was an outstanding year for Kevin Switzer, Jr. as he earned bragging rights as the top harness driver in Maine, scoring 377 wins, 68 more than his closest competitor. More impressively though, his .410 UDRS, a sort of batting average for harness drivers, ranked Kevin as the top percentage driver in all of North America in 2014 while the horses he drove earned more than $1.1-million in purses. Drew Campbell, the perennial powerhouse among a very competitive drivers colony secured yet another Drivers Championship in 2014, spinning together a grand slam performance on the closing day card to augment his meet’s leading tally to 199 seasonal scores. Currently the third rated UDRS driver in North America, Campbell closed out the year in identical fashion to the way he began it, winning both the first and final dash of the nine month meet. (excerpted from Meharness.com)

While at the Children’s Hospital, the reinsmen will share their experiences working within Maine’s harness racing industry as owners, trainers and drivers of Standardbred horses. The horsemen will distribute, Margarita, One Fair Lady, a children’s book telling the story of a harness racing family and their experiences on the Maine Agricultural Fair Circuit. In addition, children will be given coloring books donated by the United States Trotting Association, 2015 Calendars featuring photographs of Standardbred horses provided by the Maine Harness Racing Promotion Board, T-Shirts donated by Bill Phipps, and heart bracelets made by Olivia, a special young lady. As part of this effort, Scarborough Downs is extending an invitation to the children’s families to attend opening day races at Scarborough Downs and witness our beautiful Standardbred athletes compete on the half mile oval. Families will be hosted by Denise Terry, a Scarborough Downs Executive. Others attending the charitable event at the Children’s Hospital will be Bethany Graffam and Janet Davis.

The “All Heart” Campaign was founded to bring greater visibility to Maine’s Harness Racing Industry. For many harness racing’s face is the two minutes seen as reinsmen with their Standardbred race on tracks throughout the State of Maine. The Campaign presents the stories and images of Maine Harness Horsemen and their families as they work throughout the year beginning in the early morning and throughout the day as they manage, train, and care for their Standardbreds as they prepare them to compete at Scarborough Downs, Bangor Raceway and Maine’s Agricultural Fairs.

To learn more about the “All Heart” initiative and the history of harness racing in the State of Maine, you can join the “All Heart”Campaign Facebook Group or visit the Lost Trotting Parks Heritage Center’s online museum at https://losttrottingparks.com. For more information contact Laurie MacKenzie by calling 207-205-2768.