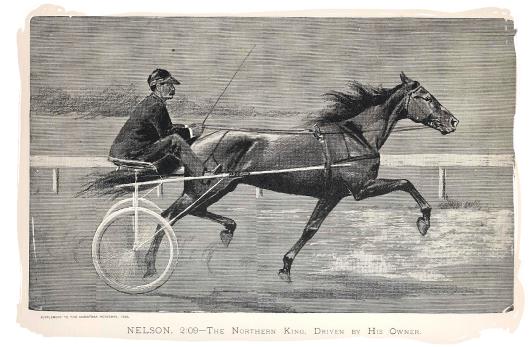 The Balch Race was to be the rematch between Nelson 4209 and Alcryon. An article in a Hallowell newspaper prior to the race indicated that many Mainers would be in attendance and that fortunes would be made and lost on this race. Rumors swirled the night before the race — the fix was on. For the win, Nelson would pay F.L. Noble, Alcryon’s manager, $5,000 which was the amount of the winning purse. Plus Noble would be able to keep any winnings. Nelson did not want to drive Nelson 4209. He had secured the services of Budd Doble, but Doble back out at the last moment. Nelson attempted to secure the services of John Splan. Oddly, Splan had been paid $500.00 by Noble just to walk about the grounds on the day of the race. A news article published after the race reported that Alcryon had been shoed with heavier shoes that would result in breaking throughout the race. Nelson won the race in three heats.
During an evening of libation it was reported that one of Noble’s men told others of the fix. An investi-gation ensued and the National Trotting Association secured Nelson’s check to Noble. Nelson contin-ued racing Nelson 4209. However, in an affidavit to the NTA Nelson confessed that he was party to a fraud. Nelson had told others that he had been approached the day before to fix the race, but declined. However, Nelson reported in his affidavit that a close business associate without his knowledge set the fix and that he was not in a position to undo what had been done. John Splan in his testimony reported that he had been paid to not drive, but also stated that he saw nothing in the performances of the horses that indicated any wrongdoing. Nelson refused to identify his business associate. Nelson and his famous stallion were barred from all NTA tracks. Initially, Noble, Alcryon’s manager, refused to cooperate, but eventually admitted the fraud. Balch, a horse trader and promoter of the race, committed suicide due to his financial difficulties .


Both Nelsons, man and horse, suspended as reported in New York Times on December 7, 1890. 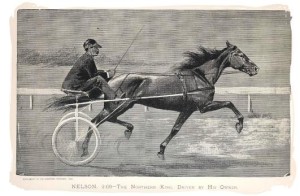