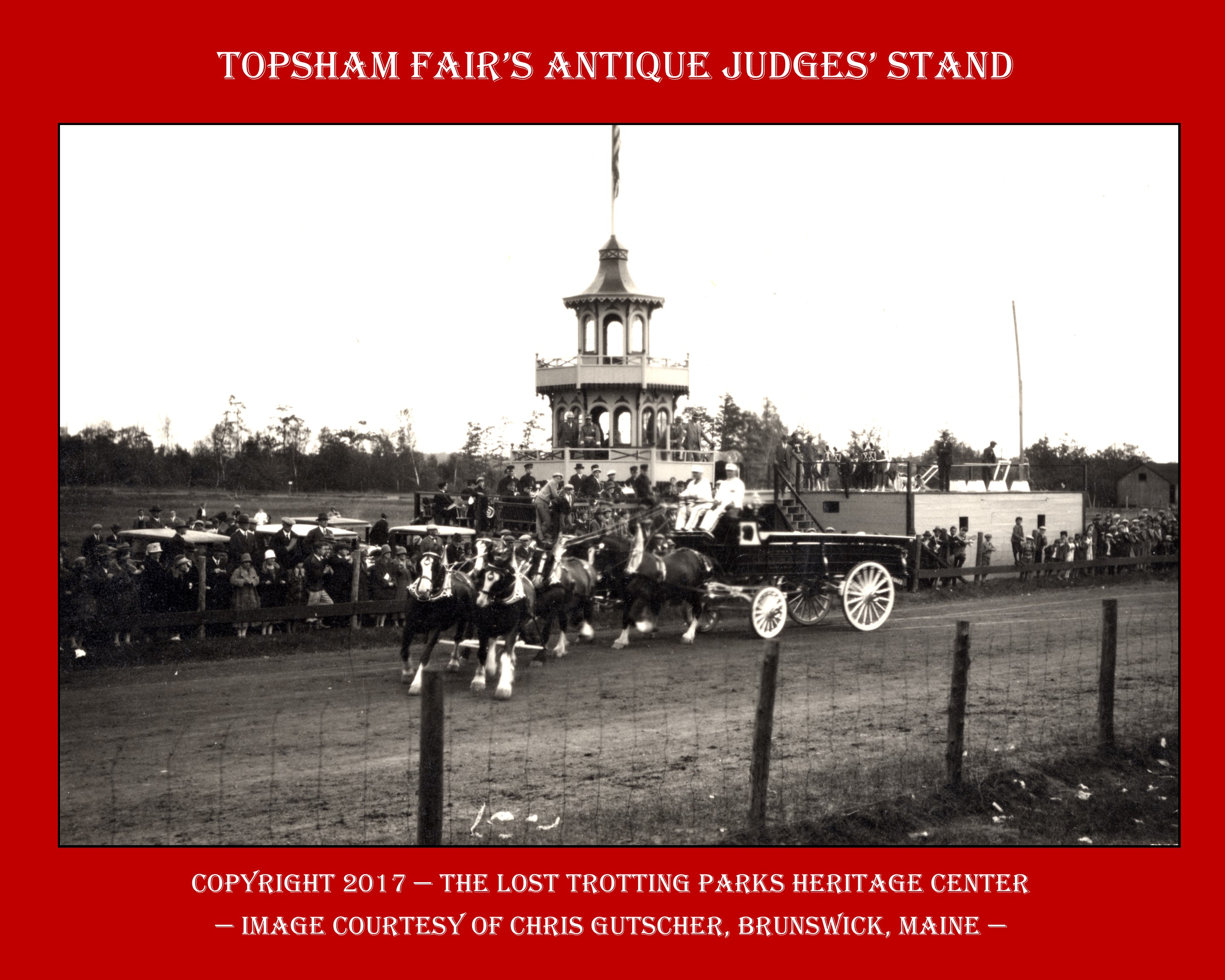 For at least three years I have known that when the 19th century judges’ stand was removed from the infield of the track at the Topsham Fairgrounds, I knew that it had been placed at a home in Brunswick, Maine.This year after harness racing, I spoke with Ronald Ponziani who had a horse racing that day. His harness racing career began in 1968. At this time he was able to talk with and hear stories of the elder harness horsemen of the day. At some point I brought up the old judges’ stand. Ronald, also known as Ponzi, he had the answer. Here is his story. When the stand was removed from the infield, it became the possession of Emory Booker who was a well known jeweler in Brunswick. The stand was placed in his yard that was behind the Joshua Chamberlain house. As time passed the structure deteriorated. The top of the stand was taken down. The lower part of the structure was given to Harry Crooker. At some point Crooker decided to destroy the lower structure, but his son Ted acquired the structure and preserved it. Today the old stand now called a Gazebo and a desired wedding location can be found on the edge of the Androscoggin River. Ponzi and Ted were childhood friends. Through Ponzi I was able to contact Ted and was given permission to visit the Gazebo, once part of Topsham Fair’s Harness Racing History. Ted Crooker connected me with his neighbor Chris Gutscher who provided me with his period photograph of the judges’ stand to scan. As I photographed and examined the structure of the Gazebo, I wrote down a few dimensions. Perhaps the creative carpenter that is lost in most of us could create their own Gazebo for their yard — height of inside walls 93 inches — distance between uprights 56 inches — width of each window 20 inches, height of each window 43 inches, inside width of opposing octagon pieces almost 11 feet, height of outside railing from the ground to the top of the railing 76 inches, and width of the outside walkway from outside wall 44 inches. There are five images in the following slideshow. 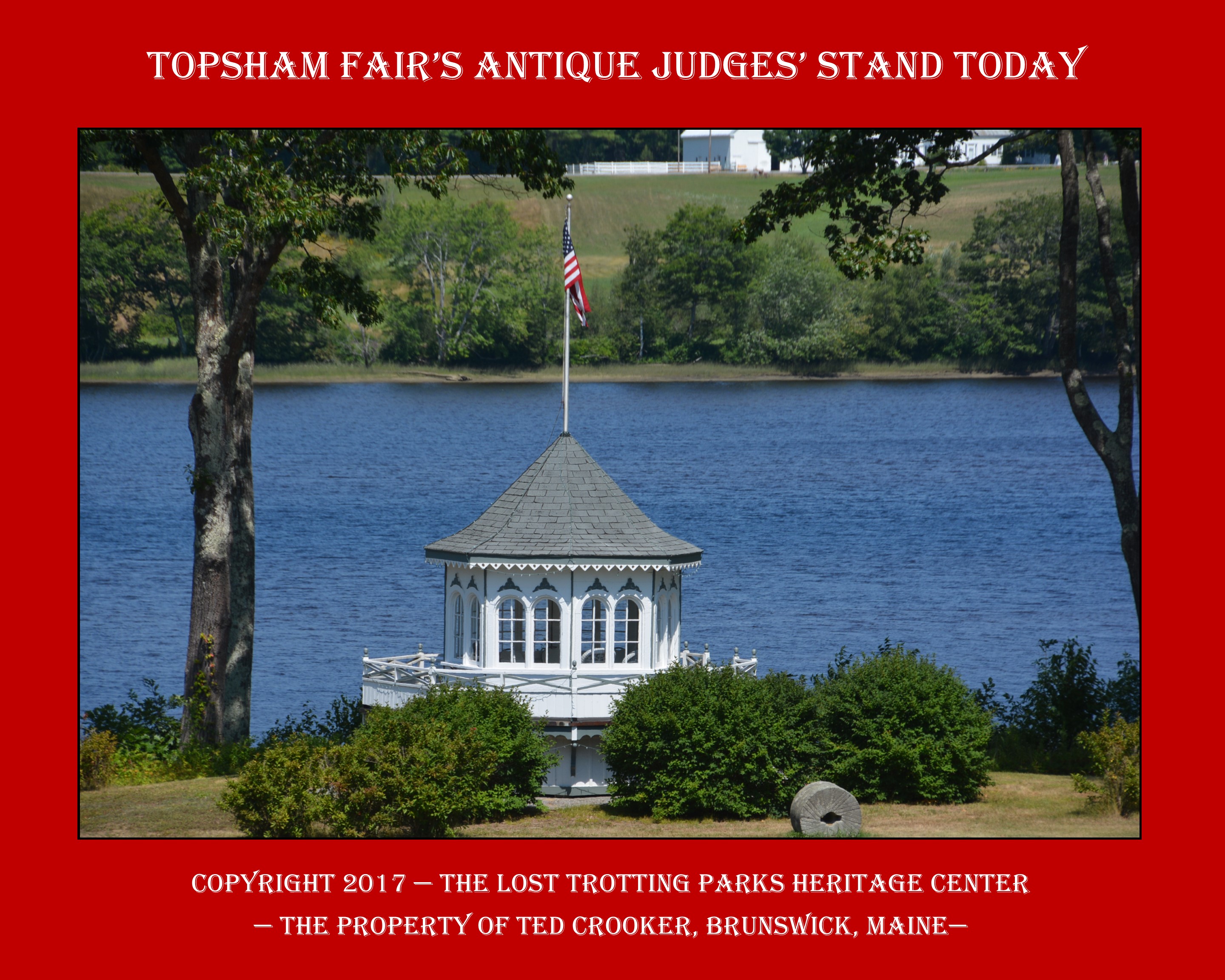 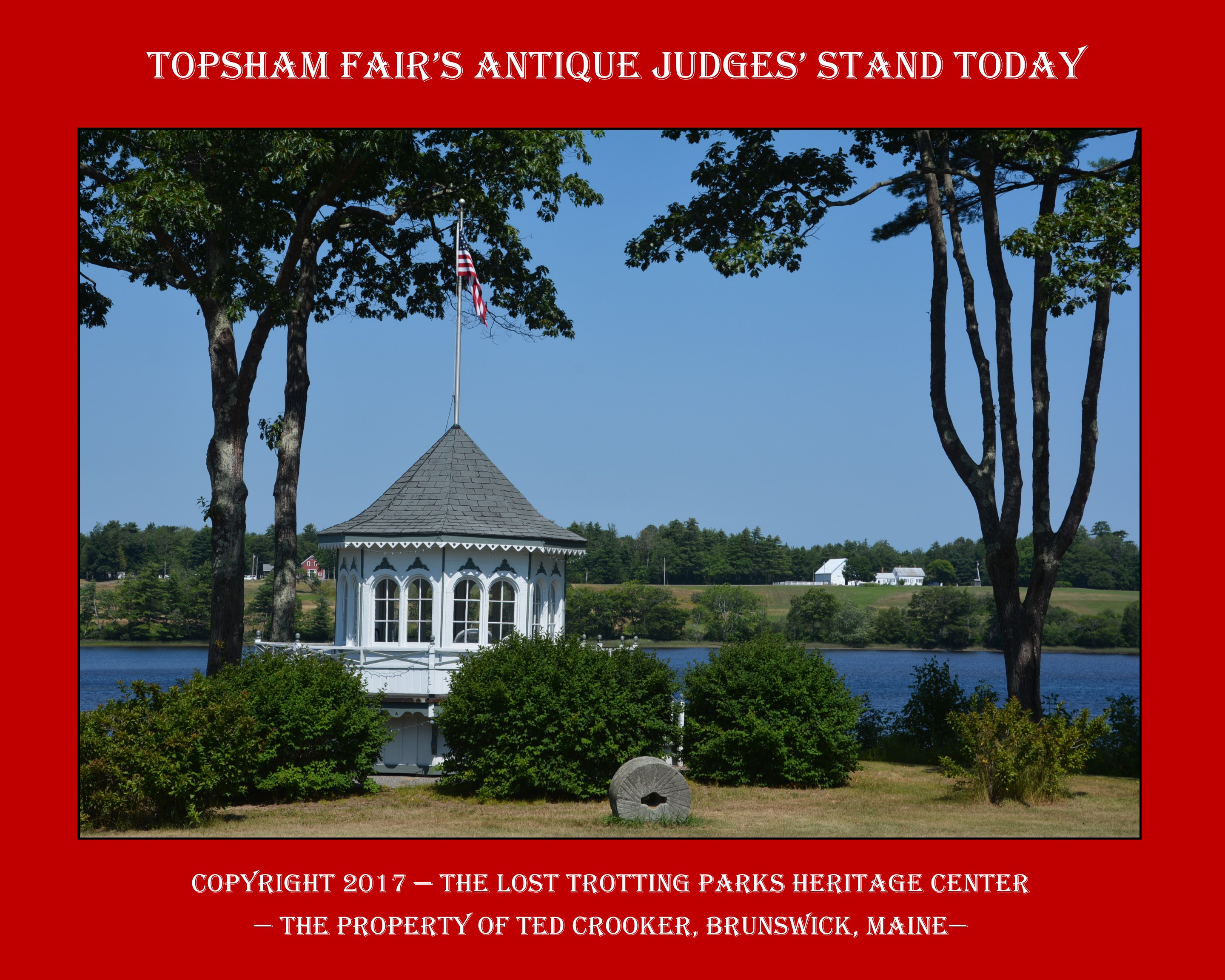 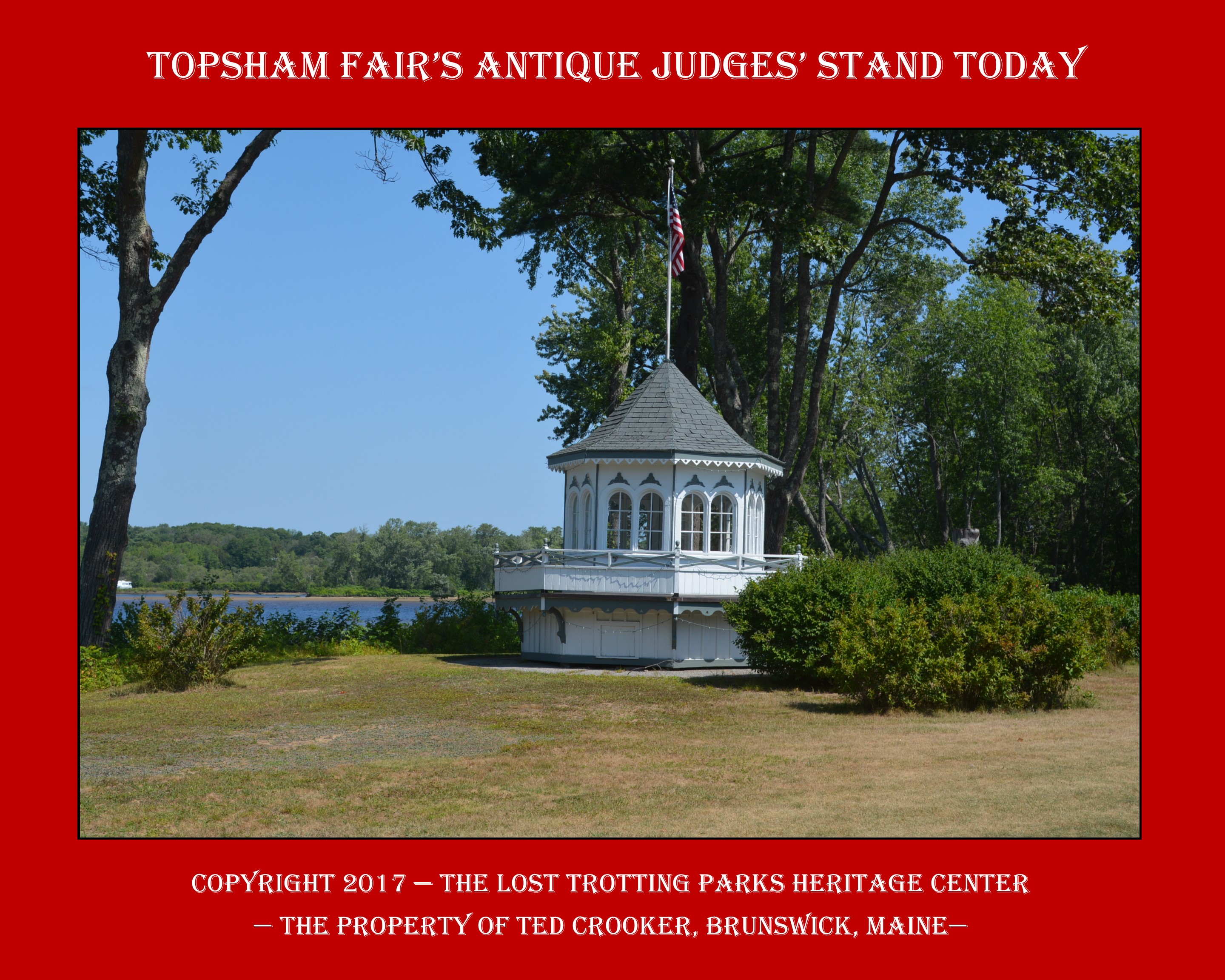 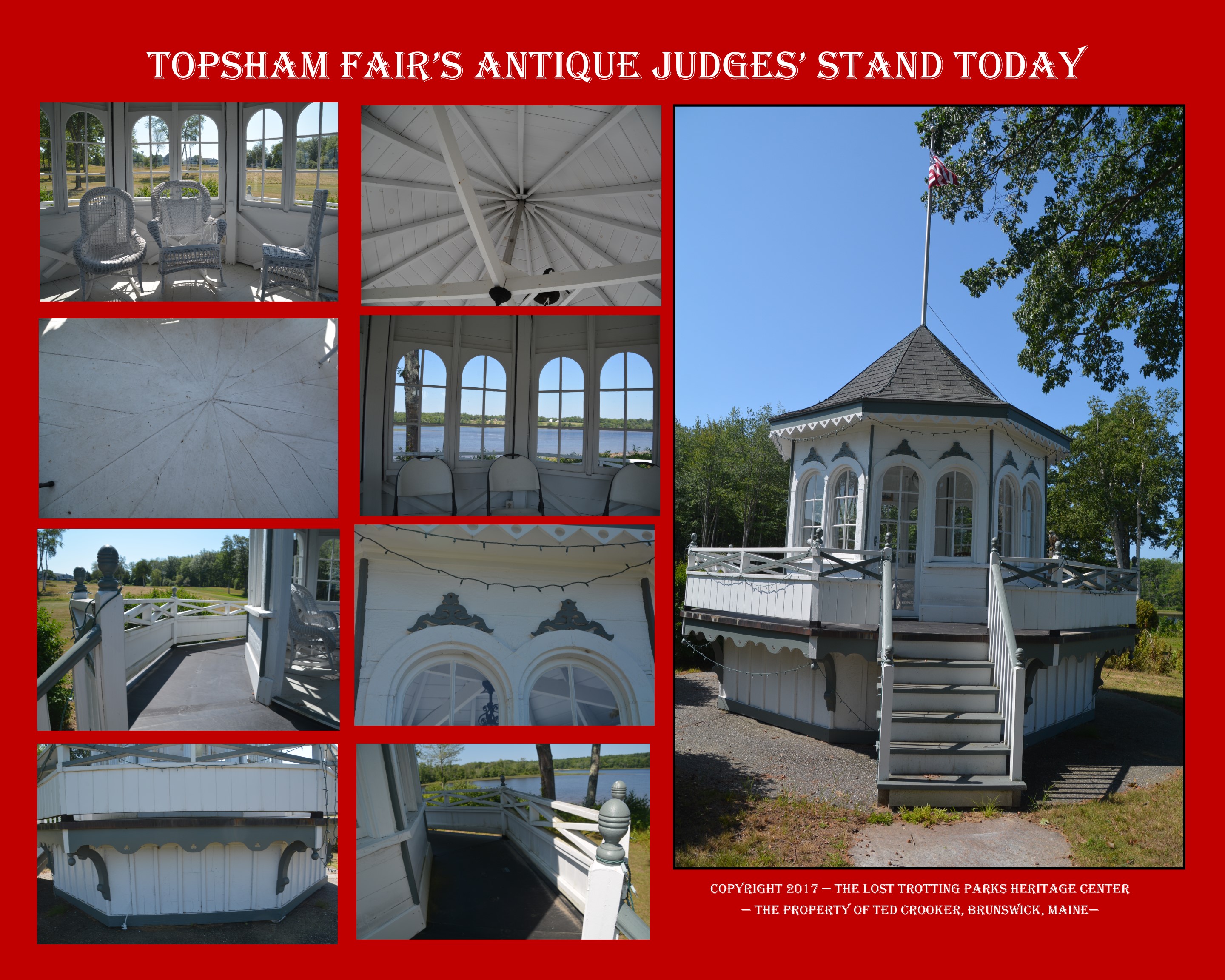