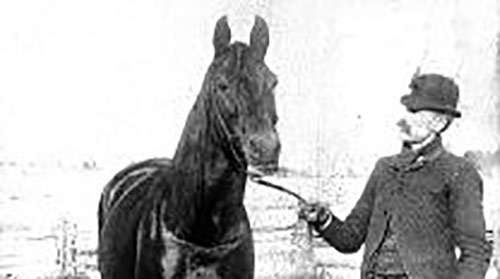 It is said that some of us seek fifteen minutes of fame — a few moments of glory. Others of us make decisions that will lead to overwhelming disgrace. If fortunate, those who are Disgraced may find redemption. Charles Horace Nelson, born in 1843 in Palermo, Maine, in his career as Maine’s most famous horseman experienced all: fame, glory, Disgrace, and finally redemption.

Known as Hod by his many friends, Nelson grew up in Palermo, a small country town twenty miles from Waterville, Maine. Hod’s father, Benjamin ran a country store. Little is known of Hod’s developmental years. Historical documents indicate that Hod attended public school and his family attended the Baptist Church in town of China. It was through a church building committee that Hod’s father Benjamin worked with Francis Jones, the father of Hod’s future wife, Emma Aubine Jones.

Although this narrative tells the story of C.H. Nelson, his lifework was tied to his world champion trotting stallion Nelson 4209 by Young Rolfe out of Gretchen foaled in the nearby town of Winslow, Maine in 1882. According to his own account in a letter to the Clark Review, Hod first admired the dam of Gretchen at his father’s store hitched to a wagon. Even at a young age Hod had an interest and an eye for a good horse.  The driver of that wagon was A.K. Jones of Vassalboro.