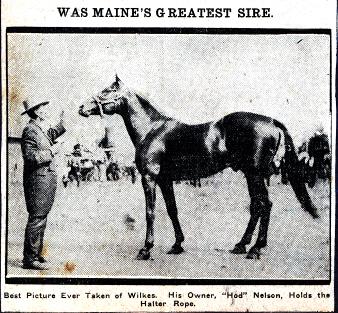 Although we know that Nelson continued to operate Sunnyside Farm and race a few horses, writers of articles for the horse periodicals or books related to trotting history seemed to leave C.H. Nelson and his famous stallion out of the historical record — perhaps pay back for past behaviors. However, in 1907 Nelson was asked by the organizers of the Central Maine Fair to put together a display that would be called “Nelson Day.” Nelson agreed to create the display. Nelson called all over New England and asked purchasers of the get of Nelson and his other stallion Wilkes to participate in a parade of horses at the Central Maine Fair in Waterville, Maine. Here Nelson found redemption. On Nelson Day sixty of Nelson’s and Wilkes’ get paraded on the track at the Central Maine Fairground. Afterwards, newspaper accounts applauded the grandeur of such a magnificent parade and doubted if such an event would ever be repeated. Nelson spoke to an audience of more than 2000 Mainers on his work and his horses. Trophies, paintings, and photographs were on display in the Grand Coliseum. Nelson 4209 had hundreds of visitors in his stall.

In 1893 Nelson, along with two other Mainers, E.L. Norcross, and George H. Bailey, were recognized in a group photo of superior horsemen from across the country. From 1882 through 1888, Nelson was at the top of his game. Between 1888 and 1892 Nelson and his famous stallion set world stallion records on both regulation half mile tracks and mile tracks. He played the hand dealt him as a result of the Balch Race the best he could. Given the disbelief on the part of John W. Thompson, publisher of the Maine Horse Breeders’ Monthly and others regarding Nelson being party to a fraud, it just might be that Nelson got caught up in an event beyond his control. Some writers proposed that Nelson was duped by Noble and his boys. Nelson never identified his business partner who agreed to the fix. 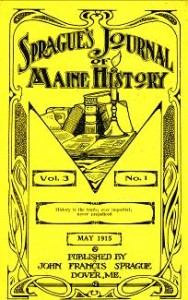 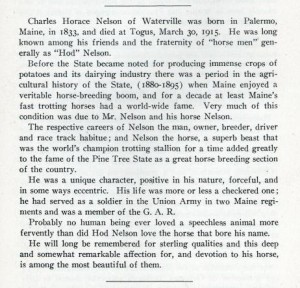 Upon the death of his horse, Nelson the man was never the same. He was in ill health, said to be feeble and almost blind. He had made few public appearances. Nelson’s wife Emma, who had been caring for him at Sunnyside Farm, suffered from a stroke and was unable to continue his care. In March of 1915 Nelson died at the Soldiers’ Home in Togus, Maine. An interesting note: Nelson’s Togus medical records reported that he could not read or write. Emma, who traveled with her husband for all those years, died in an apartment on Silver Street in August of 1916.
His obituary in the Waterville Sentinel used the phase, “a once famous horseman.” In his day, Nelson was criticized for his handling of and driving of Nelson 4209. However, Charles Horace Nelson brought fame and glory to his name and to the State of Maine. He traveled by train all over the United States, throughout Maine, and Canada to race and exhibit his horse. In Maine after Nelson 4209 gained his reputation for speed, Maine horsemen would not enter their horses into competition with Nelson. Therefore, Nelson 4209 was mostly exhibited at fairgrounds and tracks throughout Maine. In his day, in his moment, Nelson was a famous horseman and his horse Nelson 4209 was recognized as the King of Stallions. 100 years have passed since the death of Nelson 4209 and 2015 will be the 100th anniversary of the death of Maine’s most famous horseman, Charles Horace Nelson, a man of humble origins from the town of Palermo. The story of C.H. Nelson is unique — a story of accomplishment, a story of perseverance, a story of intrigue, a story filled with great moments of success, fame, and glory, and an irreversible moment that brought disgrace, and finally his day of redemption.

It is this story, Hod Nelson’s story, that speaks of immortality. That is — only if we choose not to ignore it.
I, hereby, nominate Charles Horace Nelson to the National Harness Racing Museum’s Hall of Immortals.